Over time, our past is remembered and memorialized within writings, museums, monuments, and memorials. The way that the history of a time or place is presented and portrayed shapes how history is remembered and the lessons we learn, as well as how impactful the lesson will be. As a result, curators and designers must carefully consider how visitors are impacted by their designs. In the case of Dutch memorials, designers have attempted to create memorials and museums that portray the past in a respectful yet truthful light. With respect to Dutch design of museums and other memorials of the Holocaust, curators continue to struggle over how to portray their country’s own misdeeds of the past.

The design of the museum can be as important as the artifacts inside. The presentation of information as well as the presentation of its setting can have an impact on the experience in a museum or memorial. In her book The Artful Eye: Learning to See and Perceive Otherwise inside Museum Exhibits by Jennifer Hansen-Glucklich, she borrows Mike Bal’s usage of the word “grammar” to describe the unique ways curators and designers establish the atmosphere and composition of the memorial space. Using Israel’s Holocaust museum and memorial as an example, Glucklich writes that “Yad Vashem’s permanent exhibition draws on certain display techniques such as canted angles, asymmetrical hangings, and the deliberate exposure of wires used for suspension that deviate from the dominant grammar of conventional museum practices” (Glucklich, 89). By arraigning an unorthodox design within the memorial, the designers at Yad Vashem disassociate themselves with the cleanliness and sterility typically found in such a setting. At Yad Vashem, a visitor experiences a gritty and brutal visual experience as they make their way through the exhibit as it zigzags through the building. This choice in “grammar” allows viewers the experience of being made to feel uncomfortable among the ugliness and mayhem that was the Holocaust.

Through the consideration of the design of the museum or memorial’s “grammar”, visitors can have a more emotional experience that will color their understanding of an event. At the same time, the curator must ensure that they accurately portray the events in a non-manipulative way. At the same time, the curator needs to ensure that they are not manipulating the source material. Curators must walk a very thin line between drawing in visitors while at the same time not warping the subject matter into something unrecognizable, especially in terms of subjects that are sensitive to many. For instance, Dutch designers and curators have struggled to evoke the necessary remorse when designing Holocaust memorials. This challenge presented itself as many Dutch have been hesitant to recognize their country’s complicities in the Holocaust. In his book Ajax, the Dutch, the War: The Strange Tale of Soccer During Europe’s Darkest Hour, author Simon Kuper writes that the Dutch are willing to twist and molest their past role in the Holocaust, to the level of distorting their elders to heroes. He notes how the Dutch seem to shift focus to their few acts of bravery instead of more commonplace atrocities. As Kuper notes, the monuments that acknowledge the Holocaust are unrecognizable to an outside eye. As a result, the grammar of the monuments has been warped to the point that the memorials can be considered abstract art. If the point of the museum is lost, then the designers and curators have gone too far in their grammar adaptation. While the monuments are pretty, Kuper writes “if you did not know the sculpture was a Holocaust memorial, you would never guess. There is no sign, no text. Rotterdam has built a secret monument for its murdered Jews” (Kuper, 234). With this monument, there is no message for the public if they do not know of its existence. For a country that struggles to acknowledge their wrongdoings, a “secret” monument accomplishes nothing. While the Dutch could be looking inwards towards the mistakes of the past, they instead choose to experience their past through a disillusioned sense of righteousness.

A more successful instance of a Holocaust memorial can be found with Joods Monument, which is made possible by integrating technology into the grammar of design. In the Joods Monument, there is a list of every Dutch Jew deported and/or killed in the Holocaust. What’s notable about this memorial is that it is completely electronic and online. The room within the museum that houses it is simply a set of computers. Within the memorial, each victim has their own page, where visitors can read their story, sometimes see their photo, and see a map of where they lived before they were taken away. The database designers chose a unique approach by combining the accessibility of the internet and computers with the overwhelming power of the names of the dead. The result is an interactive, yet respectful memorial to the lives lost. When looking at the grid of squares on a screen where each square represents one life lost, one can begin to experience the extent of the Holocaust in the Netherlands. The “grammar” of the site design is somber and cold. Upon opening the site, visitors can select a certain year, causing the screen to light up with pixels of those who died that year. It is the equivalent of an entire population’s last days all at once. The brutal display shocks the viewer and questions their assumptions about the Netherlands’ role in the Holocaust. However, the design of the site does not do this upfront nor does it point any fingers. Instead, by displaying the grand scale of the genocide in the country, visitors can confront their reality. The unique “grammar” of the memorial is funereal, with as much detail of their death and where they were killed along with known family history, all then piled into one of the many somber webpages. It is funereal as well by giving names to what many Dutch before only could imagine to as a group. On the other hand, the physical embodiment of the website, allows visitors to gain a deeper understanding of Dutch Jews. The online memorial can also be found and experienced within a larger museum called in English the “Jewish Cultural Quarter”. By placing the access to the online memorial within a larger context of Jewish life, visitors can gain a deeper understanding of what it means to be Jewish. No longer are they two dimensional victims of a time past, but they can be put into the context of a celebration of Jewish life. After leaving the memorial, visitors can learn about Jewish culture, Jewish food, and Jewish art. Instead of solely focusing on the Jews’ darkest days, a more holistic understanding of Dutch Jews can be undertaken. Through this grammar approach, visitors can understand what it means to be Jewish, as it means more than being labelled a victim of society.

Technology has started to play a role in the “grammar” of museums. Curators now can store massive amounts of information online for everyone to see, as well as have a level of interaction not previously possible. However, this adoption of technology into the museum or memorial’s “grammar” must be done with careful consideration. By putting new technologies like scan-able objects or virtual reality into a museum, curators run the risk of centering the museum around the technology rather than a tool to enhance the understanding of the subject. 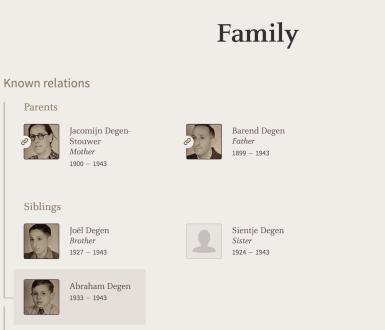 Museum designers and curators can at times have free reign over how an event from the past is portrayed. They cannot simply place objects in a room and open the doors. Instead, curators must be thoughtful of the subject matter, and attempt to find creative design and “grammar” solutions to ensure that the visitors leave with a lesson. Their jobs are important, as without them, museums would be dull, oblique rooms that do not emphasize the lessons to be learned. Instead they would be lost among the sterility of the space. [1325]