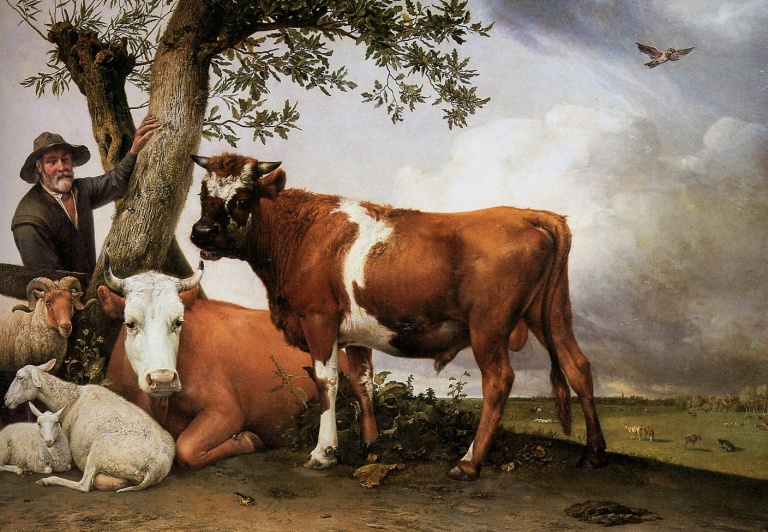 Westermann argues that the animals depicted in the Bull of 1647 are representative of Dutch pride because of the booming dairy and cattle breeding industries of the time (Westermann 108). She goes on to say cows depicted in this time period could be representative of the Dutch Republic itself. She offers very little evidence to support this claim aside from saying that cows had become a source of national pride. Westermann goes on to highlight the inscription on an etching by Hendrick Hondius II commissioned three years earlier: “so that the Dutch cow shall not be stolen from us.”

This seems to contradict the claim that the cow represents the Republic; why would Hondius II not simply have inscribed “so that the Republic shall not be stolen from us” if his cows were meant to represent the Republic? I contend that cows are depicted in a much more literal manner than Westermann asserts. The depiction of the cow is likely representative of the Dutch economy because of their central economic role in the Dutch Republic. It is also likely that the cow is simply drawn and painted in many pieces of art because they were common throughout the Republic.

It is important to note that while the cow might not solely depict the Republic, it plays a large part in its overall depiction. In Albert Cuyp’s View of Nijmegen with the Valkhof, two men sit and one stands next to two cows (or possibly bulls) across the river from the Valkhof (a foritifcation known as the falcon court). Historians viewed, “Nijmegen as the seat of Claudius Civilis and bulwark of Charlemagne and the Republic” (Westermann 102). This bulwark of the Republic would be incomplete without a cow resting. I believe that cattle and the Republic were connected, both in reality and artistically, in the same way the Kingdom of Saudi Arabia is connected to oil. Although the cow is not a depiction of the Republic itself, it is nonetheless a critical part of the Republic and therefor was used extensively in artwork during this period.

This painting stuck out to me when scrolling through the archives because it is so unlike the others. It is not photorealistic and is satirical in nature. I also am interested in learning more about what the milk cow means in this painting. Could it be that Westermann was correct in arguing that the cow depicts the Republic as a whole? Or does it simply mean financial domination by the Prince of Orange? I’ll need to do some research to answer these questions before I arrive at the museum.

I love giant paintings like this as well as depictions of famous battles. The large paintings of scenes from the Revolutionary War and George Washington’s life throughout the US Capitol are among my favorites. Waterloo was a monumental moment in history because it ended Napoleon’s conquest of Europe. Napoleon, despite being ruthless, was a remarkable man and one of the most skilled military practitioners in human history. I look forward to seeing this painting in person.

5 thoughts on “Cattle in the Dutch Republic”