While the Netherlands is most often associated with its canals, tulips, and beautiful homes, it is also home to the site where around 75-80,000 Jews were brutally murdered during the Holocaust. Following these atrocities and the turmoil of World War II, specifically the German bombing of Rotterdam, the city was set out to be rebuilt. After its reconstruction, monuments were built and placed around the city, in an attempt to honor the lost Jewish lives during the War. However, with the combination of the Dutch refusing to acknowledge their part in the war, and anti-Semitism still occurring in recent years, it’s questionable whether the structure of current memorials are actually effective.

The bombing destroyed the heart of Rotterdam. Thus its reconstruction was anticipated to be urban, sleek, and beautiful, and it was. The Netherlands was the “most urbanized part of Europe” (Betsky 12). Citizens were filled with eagerness and fervor regarding the reconstruction effort. At its unveiling in November 1945, Karel Paul van der Mandele said: “Amidst the memorials erected to those who fell in the war, this monument will rise and call us to work. Before us lies the major task of building a new city. Employers and workers must join together and persevere. They must work and create work. May this memorial urge them on and inspire them.” 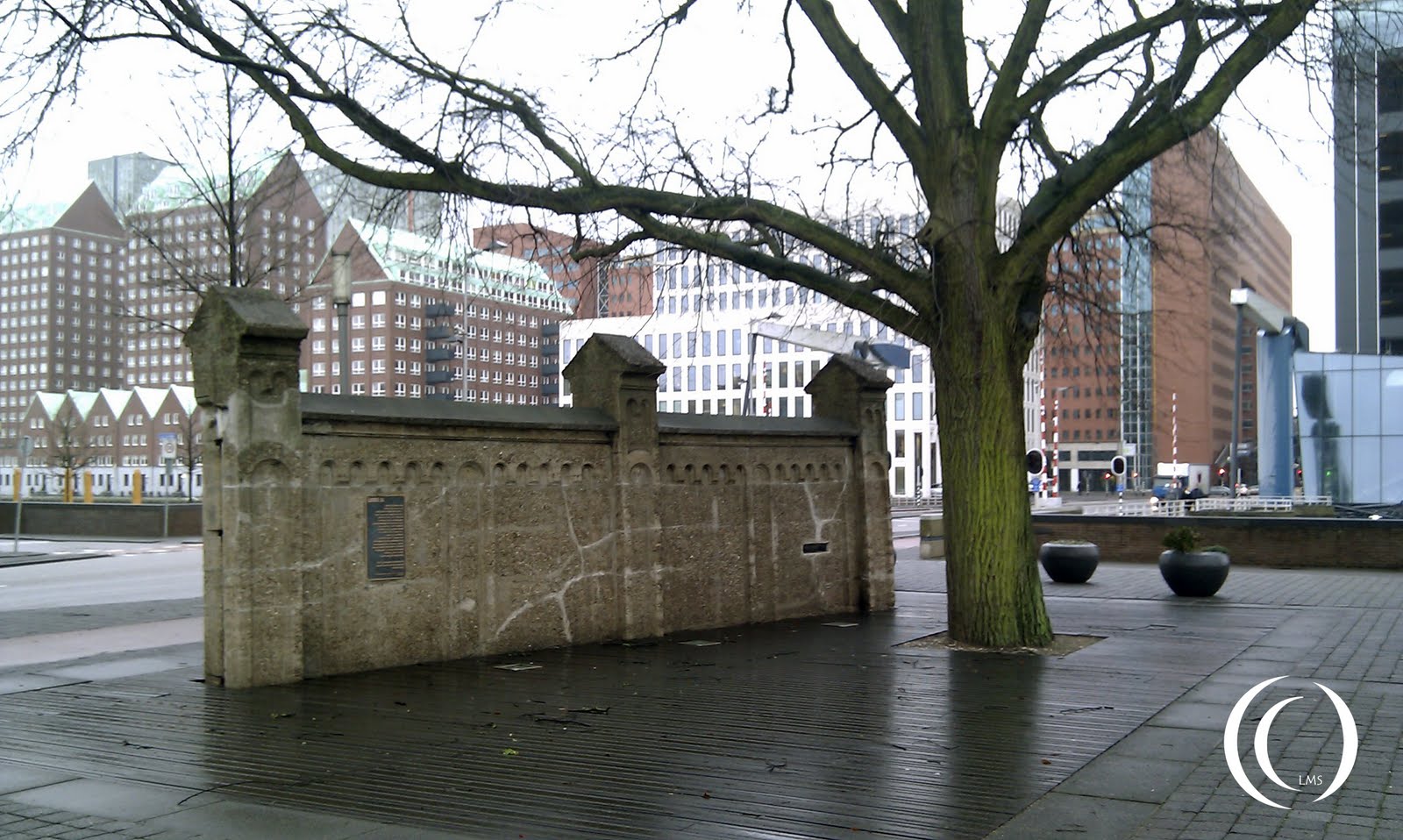 Pictured above is the only remaining wall of Transit Warehouse 24. Transit Warehouse 24 serves as a means of remembrance for the Jewish children of Rotterdam who were transported by the Germans during World War II as well as a reminder of all of the atrocities that occurred at the hands of Nazi Germany. However, due to its hidden nature, many Rotterdammers are unaware of this memorial and its meaning. In Ajax, The Dutch, The War: Football in Europe During the Second World War, author Simon Kuper expresses that “few Rotterdammers know that Jews ever lived in their city” (313). This entire city was completely wiped out due to the Nazis, yet a vast majority of their citizens still remain utterly unaware of this memorial and the city’s history. This type of behavior is not uncommon for the Dutch, as during the war they acted similarly.

Many of the Dutch people were deceived into believing that the Nazi rule would not result in the great hardships or brutal atrocities that occurred (Woolf 19). Dutch culture and tradition also placed great emphasis on showing obedience to the law. The combination of these two factors led the Dutch to believe that all they had to do was simply “outlast the German occupation”. The little resistance that did occur by the Dutch was characterized as either passive resistance or non-violent active resistance-essentially showing complacency. The Dutch were practically convinced the impact of Nazi occupation on the Dutch, even the Dutch Jews, would be negligible (Woolf 19). Unfortunately, they were highly mistaken, as the Holocaust resulted in the deaths of ¾ of the entire Dutch Jewish population. 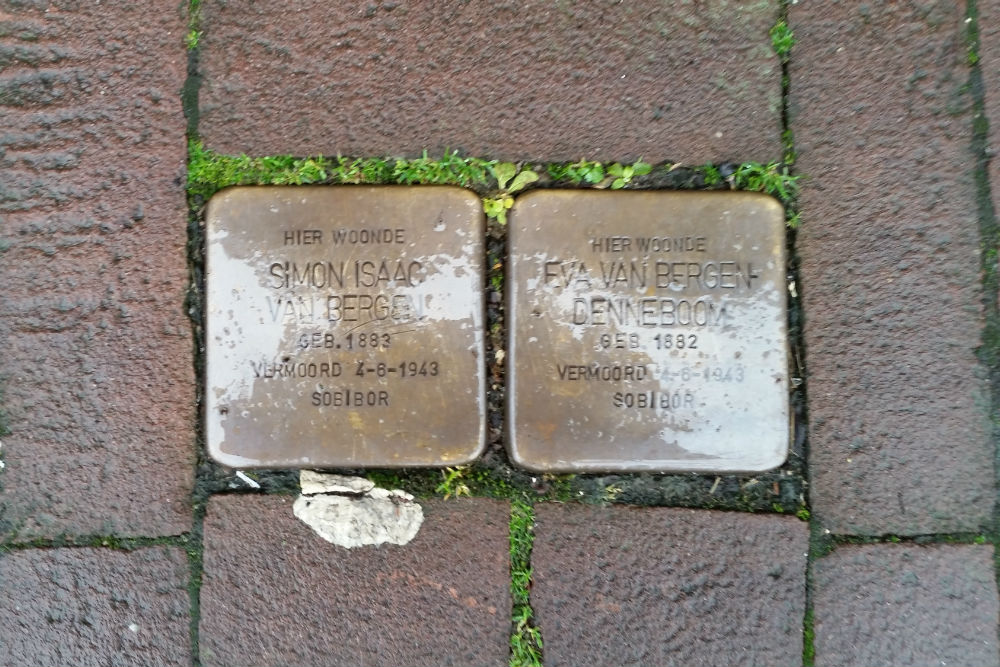 Pictured above is an image of two individual stumbling stones, part of a greater memorial-the Stolpersteine. Each stone represents one Jew that died at the hands of Nazi Germany in the Holocaust. Whereas large memorials such as the National Holocaust Museum in Development represent the scale and brutality of the Holocaust, the intent of the stumbling stones is to place greater emphasis on each individual life lost.Though Holocaust memorials are ubiquitous in Amsterdam, the Stolpersteine is different in the fact that it’s extremely personalized. To some, the unique individualization of this memorial makes these monuments much more poignant than the other more gargantuan, pompous, and impersonal statues. The Stolpersteine delineates a completely new vision of urban memorialization. However, with the constant occurrence of anti-Semitism in Europe, even decades after the end of World War II, it may be that the decentralization of this monument is not doing its cause enough justice.

In January of 2019, five Feyenoord fans were arrested over blurting out a vile anti-Semitic chant against Ajax on Holocaust Remembrance Day in Rotterdam (Liphshiz 19). As Ajax is a historically Jewish team, fans from rival teams often taunt players as well as supporters of the “Jewish team” with anti-Semitic limericks, phrases, and symbols. This particular chant which circles around the act of burning Jews is known as one of the most offensive insults. A statement given soon after this incident by the Times of Israel announced that this chant was a “recurring problem”, reflecting the proliferation of anti-Semitic sports chants in the Netherlands. Such hate crimes can possibly lead to the recurrence of horrific acts such as those conducted during the Holocaust; these actions must be properly handled before they further develop. Kuper writes about how the racist commentary from the Feyenoord fans was seemingly accepted and habitual, but this never should’ve been normalized in the first place. The normalization of such statements must come to an end, as it only perpetuates further wrongdoings against Jewish people.

As this was an extremely recent incident, it is evident that anti-Semitism is still unusually prominent in Dutch society. When looking at why such horrid statements are so commonly said, one has to look at the history of anti-Semitism as a whole. Researcher Lebovitch Dahl from the University of Copenhagen articulates that dynamics within the Roman Jesuit institution in the 1880s and 90s made possible the gradual acceptance of anti-Semitism. As there was failure trying to formulate an “anti anti-Semitic response” in the early stages, anti-Semitism was slowly allowed to become part of a widespread culture of their institution, rendering its later rejection virtually impossible (Dahl 14).

These stumbling stones should have been positioned and structured in a way so that everyone who passed by them was cognizant of the memorials and the true meaning behind them. Every passerby should feel uncomfortable and in turn should be aware of the atrocities that occurred to the Jews during World War 2. Ensuring that every passerby was aware of the memorials and what they represent could possibly help to inform the public and reduce anti-Semitism. However, they remain hidden as “the average passerby will have no idea what the wall and the monument represent” (Kuper 312)  which certainly does not pay successful tribute to the Jews that died in the Holocaust. These invisible memorials in a sense disrespect the memory of the individuals who passed away, rather than enhance it. Though they do a good job of individualizing each memorial, this effort has gone to waste if no one has learned from the past and anti-Semitic acts continue to occur.

Often referred to as Nazi sympathizers, not only for refusing to acknowledge their part in World War II, but also currently, for diminishing blatant acts of anti-Semitism that are continuously occurring nowadays, the Dutch certainly have a ways to go when it comes to accepting and dealing with their catastrophic history. The Dutch have a long history of avoiding their controversial past. Aside from their conduct in World War II, the Netherlands was involved in slave trade and the use of slavery in its former colonies. Though over 500,000 slaves worked for Dutch colonies and slave labor was a massive source of revenue, Dutch children are still not taught about their country’s past in school. The lack of adequate education on this topic in Dutch schools is a major source of limited awareness in this issue among Dutch people today (Cain 12). Additionally, the Dutch have also refused to acknowledge the sacrifices of Indonesians in a war they waged which cost around 300,000 Indonesian lives. Indonesian victims of World War II are also not commemorated. As much as the Dutch try to evade it, their past behavior is far from forgotten.

Acknowledgement is crucial. The Dutch need to accept their abhorrent history and start to admit their complicity in World War II, as well as continue to offer active support to the Jewish community. By working to start meaningful conversations, educating individuals, and creating memorials that place more emphasis on the greater message rather than simply scattering them around the city for show, the Netherlands can come together to reduce anti-Semitism and create a more welcoming society for all.

Kuper, Simon. Ajax, the Dutch, the War: Football in Europe during the Second World War. Orion, 2011.

Mitchell, Mia, et al. “Whitewashed Slavery Past? The (Lost) Struggle Against Ignorance about the Dutch Slavery History.” Humanity in Action

3 thoughts on “Holocaust Memorials: Lessening or Worsening anti-Semitism in the Netherlands?”