Restraint is a central aspect of Dutch culture which has guided not only city planning in Amsterdam but also its culture and social interactions; however, in the last several decades, restraint has been gradually disappearing in Dutch life, leaving the Dutch drained and divided. Dutch polders, which employ careful planning and make use of a limited amount of space, require that property owners exercise restraint by taking only the amount of space they absolutely need for a functional home or business. On an interpersonal level, Dutch social conventions such as solidarity require restraint from Dutch citizens, as they demand one set aside their personal inhibitions to show support to the people they share a community with. Restraint in city planning was first broken during the expansion of Amsterdam when housing complexes designed to reduce spatial restraint led to increased crime, causing housing prices in Amsterdam to skyrocket and triggering a wave of gentrification in the city. At the same time, restraint in Dutch culture was undermined by youthful hooliganism, which tied itself to antisemitism and further ingrained prejudice in Dutch society.

Building polders is a complicated process that involves damming bodies of water, draining water out of the desired area, and then building systems of canals, dikes, and gated culverts to regulate ground- and rain-water. Even when land is reclaimed from lakes, rivers, and ocean, the amount of space available to the Netherlands is very limited, and the cost of creating new polders only increases as they push further and further from sea level. From the need to make efficient use of their reclaimed land arose a new discipline known as spatial planning, which “integrated agricultural and economic policy, town planning and urban design, hydraulic engineering, demography, and social studies” (Meyer 80). This discipline has been used to solve various problems of city planning; for example, in 1901, in response to overpopulation and lack of quality, affordable housing, the Dutch government issued the Housing Act which required big cities, namely Amsterdam, to build new affordable housing, as well as better infrastructure for said housing. Using spatial planning, famous architects like Piet Kramer and Michel de Klerk built hundreds of new homes for the city’s lower classes, including “De Dageraad” or “The Dawn” (pictured below), over space once reserved for Olympic stadiums and greenery. By overriding the market and investing in much-needed housing for Amsterdam’s poor, and by doing so with efficient use of materials and land, Amsterdam and the Netherlands as a whole displayed that restraint is what makes spatial planning such an effective tool for the Dutch economy and its people. 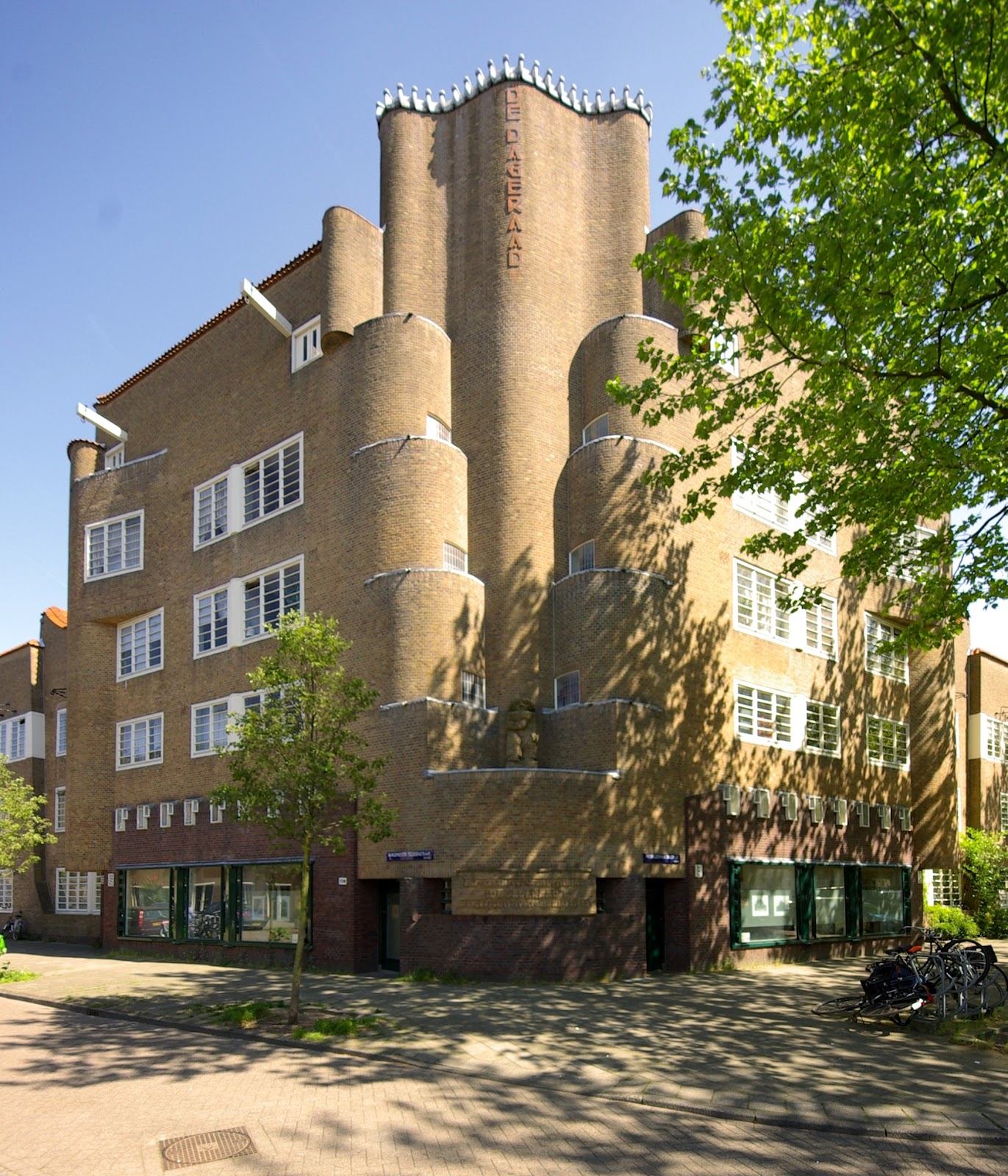 A common thread among the stories told by Simon Kuper is the solidarity of the Dutch people. Solidarity seems to be an especially binding principle within the various clubs, such as Ajax, which hold great importance in Dutch society. Solidarity is inherently an act of restraint, as one must often set aside personal impulses such as fear or dislike to show support for another of one’s community. During the war, Ajax showed solidarity with its Jewish members in its annual report for 1941-2 in which they expressed fear that “many more of our members will be taken away” (Kuper 105) and included subtle references to Jews who had been captured by the Nazis. Kuper remarks at how no other Dutch club took such a stand for its Jews, and how remarkable it is that Ajax never discusses it now: “Boasting about minor acts of wartime resistance is a Dutch custom, so why doesn’t the club join in?” (109). Ajax’s actions here show a twofold restraint: On the surface, they prevent themselves from bragging about a comparatively brave action during a grey period in Dutch history, but more deeply, they expressed principled solidarity with their Jewish members, setting aside fear of the Nazis in order to do so. Solidarity, however, has not always been heroic in hindsight. After the war, Ajax set up a Purge Committee to expel members who had collaborated with the Nazis during German occupation. While the Committee did expel the most heinous collaborators from the club, Kuper reflects on how many more were let off the hook. In fact, the head of Ajax’s Purge Committee “was blamed by fellow-members for the rest of his life for having been nasty to Ajax men (‘How could you do that to your own people?’)” (114). Meanwhile, Jewish members were left feeling discomfort around those whom they “would rather not have seen again after the war” (114). In this instance, solidarity appeared as a form of social pressure which forced the Purge Committee to act in restraint when punishing their members and forced Jewish members to act in restraint by tolerating members they felt ought to have been punished.

On a broader scale, restraint has been a source of neglect in Dutch memory with regard to World War II. Though the Dutch did very little to combat the Nazis – the invasion of the Netherlands lasted only five days before the country surrendered – their actions during German occupation are often misremembered. Their retelling of history tends to focus on the heroism of the Dutch, undermining the Germans and protecting the Jews; this is personified by their pride in the fact that Anne Frank was hidden in Amsterdam. Yet, they are often silent about their moments of passivity or even compliance with the Nazis: Amsterdam lost 80,000 Jews – 75% of their Jewish population – with little resistance, and Anne Frank was ratted out by an Amsterdammer. This silence was a form of restraint, as the Dutch initially refused to acknowledge their own fault during that dark chapter in their nation’s history.

In the decades following World War II, Amsterdam and the Netherlands have seen a slow disintegration of restraint. In the realm of spatial planning, this is exemplified by the failure of the New Objectivity school of architecture, especially in the Biljmermeer neighborhood. This school emphasized function over form and followed the philosophy of “light, air, and spacious green” (Schaaper). As such, housing in neighborhoods that followed this school was built in uniform, blocky high-rises with elevated highways, giving ample room for open green space. New Objectivity’s effort to compartmentalize work and living spaces aimed to liberate its residents from the spatial restraint of inner Amsterdam and maximize recreational space; however, the vast openness of these neighborhoods served only to enable crime. These neighborhoods weakened the influence of restraint in Dutch spatial planning but failed to produce a stable alternative, triggering a downward spiral of housing in Amsterdam.

Housing prices in Amsterdam, as well as other major Dutch cities, continued to rise, prompting the Dutch government to create its ‘Groeikernenbeleid’ or ‘growth core policy,’ which aimed to push people away from heavily populated cities like Amsterdam and towards smaller, less populated cities. However, only upper- and middle-class citizens had the means to follow this directive, leaving the cities’ poorest residents behind. The outflux of capital prompted Amsterdam’s housing market to act drastically, building expensive housing on the harbor islands of Amsterdam for the city’s wealthiest. One apartment building at the Wood Harbors currently prices its apartments at 16 million euros per month. Buildings like this have significant ripple effects on the city’s housing market, causing prices to skyrocket – not only due to increased demand but because businesses in the surrounding areas also increase their prices, creating a feedback loop of rising costs that invariably gentrify the city. Spatial planning has failed to remain the dominant doctrine in Amsterdam’s development, and the lack of restraint in the market has been critical to Amsterdam’s ongoing gentrification.

In the social realm, nothing exemplifies the disintegration of restraint more than the rise of football hooliganism and the antisemitism which accompanied it. The Dutch only began discussing the Holocaust and their involvement in it in the 1960s, and they had only begun to process the evils that had occurred during their lifetimes. In the 1970s, “the first Dutch ‘sides,’ or gangs of young fans” (Kuper 210) emerged in football. These young hooligans eventually began touting Nazi symbols and labeling Ajax fans ‘Jews’. As the Stiba, a Dutch group that fought anti-Semitism, warned against ‘Jewing’ at Dutch football games, chants like “There comes the Ajax train from Auschwitz” (Kuper 213) and mimicry of gas chambers and Nazi salutes, as shown in the picture below, grew in popularity among the sides. They were attracted to the taboo: “The Dutch establishment clearly thought the murder of the Jews had been a very bad thing. This inspired the hooligans” (Kuper 211). Hooliganism stood in direct opposition to restraint; in a cruel irony, by delaying the conversation about their role in the Holocaust, the Dutch had actually served to worsen the antisemitism which could have been restrained in the post-war context twenty-five years prior. This antisemitism is still embedded in Dutch culture and especially their sports: the picture below was taken at a PSV game in 2015. The failure of the Dutch people to disallow antisemitism is clear evidence of a loss of restraint in Dutch culture. 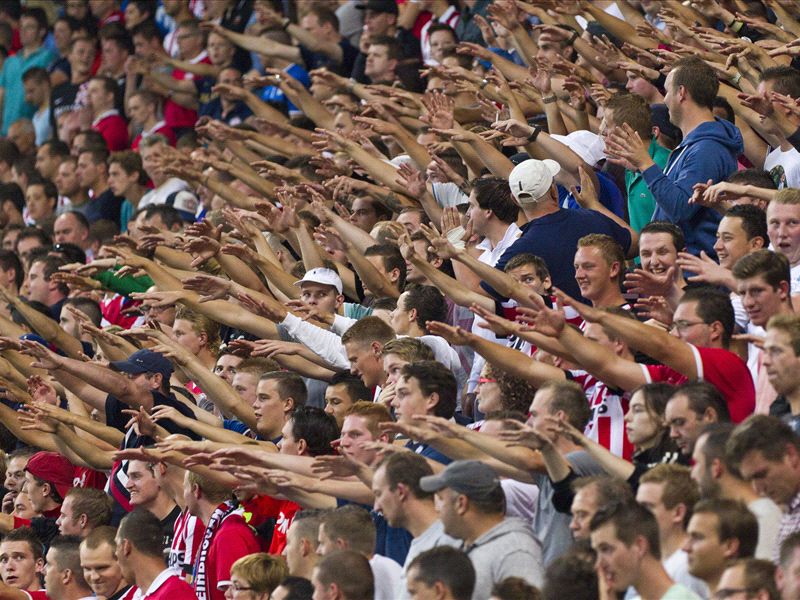 Restraint has been a guiding principle in Dutch society for centuries. It guided the development of the polder and the efficient distribution of land through spatial planning, and it bolstered solidarity among the Dutch people, a phenomenon that has simultaneously fueled acts of bravery and suppression. In the last century, however, restraint has slowly disappeared, and from its ashes negligence, indifference, and ignorance have risen unshackled. Simon Kuper writes that, during German occupation of the Netherlands, while some Dutch people were undeniably goed (good) while a few others were definitively faut (mistaken), “most people were neither distinctly goed nor completely fout; and, confusingly, some were both” (Kuper 117). While restraint showed itself to be both goed and fout, Amsterdam’s loss of restraint and the consequences for its least powerful have been decidedly fout.

Kuper, Simon. Ajax, the Dutch, the War: Football in Europe during the Second World War. Orion, 2003.