Known for its grandeur and richness, the Dutch Golden Age was an era which appealed to the wealthy aristocrats. As the Dutch Republic was becoming dramatically more prosperous as well as gaining political power, this caused a rise in the production and consumption of artwork. “Urban institutions, wealthy merchants, and high officials” were eager to obtain the novel art pieces, exemplifying that they were part of the elite (Westermann 178). Glamorized by white elites, portrait paintings thrived during this period as there was a large mercantile class ready to commission portraits. This era was dominated by white people and often diminished the roles of black individuals. Though the achievements of the Dutch Golden Age have largely been accredited to white elites, there is a forgotten portion of this era that highlighted black individuals as shown by the exhibition at the Rembrandt House, “Black in Rembrandt’s Time”. As portraits were often filled with the negative depiction of black people as exemplified in Dutch folklore and artwork, this exhibit set out to diminish these stereotypical views and show us the beauty in black portraiture. 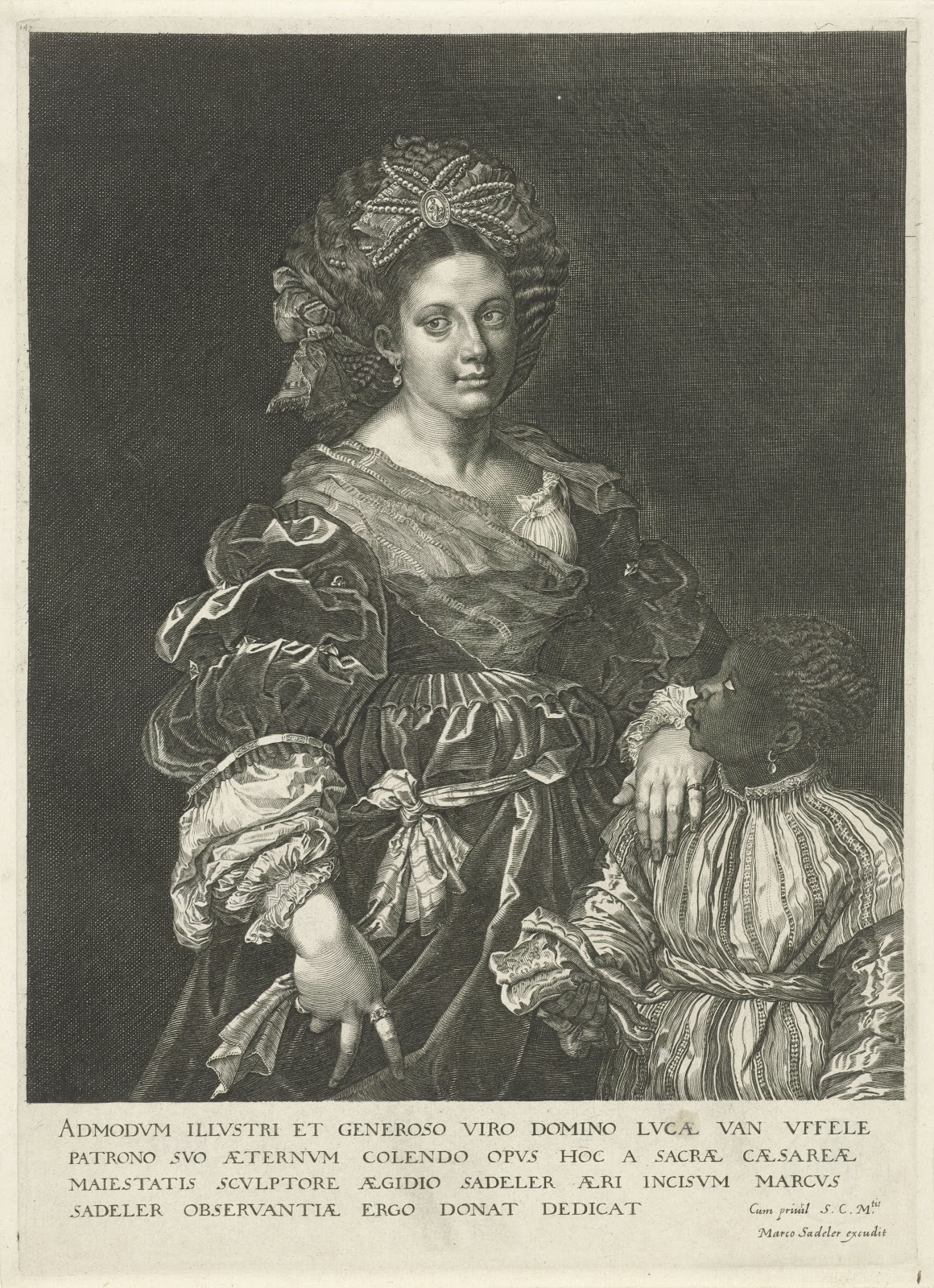 The engraving above, “Portret van Laura de’ Dianti” by Aegidius Sadeler represents the stereotypical image of a wealthy white noble hovering over her black servant. Garnished in intricate, luxurious brocades, astonishing jewels and an elaborate hair piece, Dianti exudes wealth. Her jeweled hair piece, a diadem, symbolizes her elite status as it is worn as a badge of royalty. Adorned in luxurious clothes and owning a slave, Dianti’s prosperity is signaled by both of these factors. The presence of a slave indicates and exemplifies her status as an elite. The possession of a black boy is considered a boost to her wealth, showing how black people were treated as mere objects. The technique used to illustrate the face of the boy is the same technique used to make the background. The dots on the face of the boy are exactly the same as the dots in the entirety of the background. This results in the boy blending even further into the background, diminishing his role as a human. While Sadeler illustrated Dianti with luxury and light, when he drew the face of the servant boy, he merely used the same techniques he did as when he engraved the plain background. This leads into the bigger picture, representing how black people were treated in this time period, showing how they were only minuscule characters in the background, supporting their white counterparts.

To further emphasize this power dynamic, Dianti rests her hand on the shoulder of the African page boy. The size of the servant is used to draw attention to the height and the grandeur of the woman. Dianti takes up a majority of the room in the image, exhibiting her power and importance over the boy. The expression on her face is smug and complacent, which also amplifies her superior status. Similarly, the black boy is holding a rag, highlighting his subservient position. He glances up at her with a look of compliance, admitting his subordinate role by just the look on his face. These aspects of the image are utilized to exemplify the power that the white elites held while diminishing the role of black people.

Deprived of identity and any form of individualization, this young, nameless, black boy is pictured solely for the purpose of enhancing the status and wealth of Dianti. As servants were often a marker of affluence and reputation, they were pictured in Dutch artwork in order to magnify the eminence of the nobility. Often placed in the background to avoid distracting from the main, typically white, character, in 17th century art black people were seen in minor, subsidiary roles, as depicted in the portrait above. They were simply used as objects in an attempt to accentuate the power of the elites. A majority of 17th century Dutch artists dehumanized and objectified black individuals in their artworks. Illustrating them as merely tools rather than as humans displayed the racist attitudes and beliefs that many Dutch people held at this time.

While the white elites were prospering, this all came at the expense of black people. In Blakely’s book, “Black in the Dutch World”, he articulates that the definition of the word “Dutch” in itself is problematic. The term “Dutch” refers to natives of the European culture, or those who became completely assimilated into it. It doesn’t even attempt to include all the areas that were controlled by the Dutch, including the ones containing black people. By treating black people as outsiders to begin with, as they weren’t even able to identify with their own country that they lived in, they were bound to feel excluded. On top of this, black people constantly endured belittlement, threats and insults on a daily basis by white people. As Blakely described in chapter 3, white families would often make innuendos degrading the skin color of black people as a joke, further ingraining racism in Dutch society, normalizing it and making this racial discrimination more commonplace. In actuality, these supposed jokes were “outwards signs of much more serious and deep-seated societal problems” (Blakely XIV). Black people were often used for entertainment purposes. Many 17th century portraits paint black people as caricatures, depicting them in a comical manner. Lack of education played a major role in this ignorance, as citizens often saw slavery and racism as an outside matter, not something that was constantly occurring in their own country. 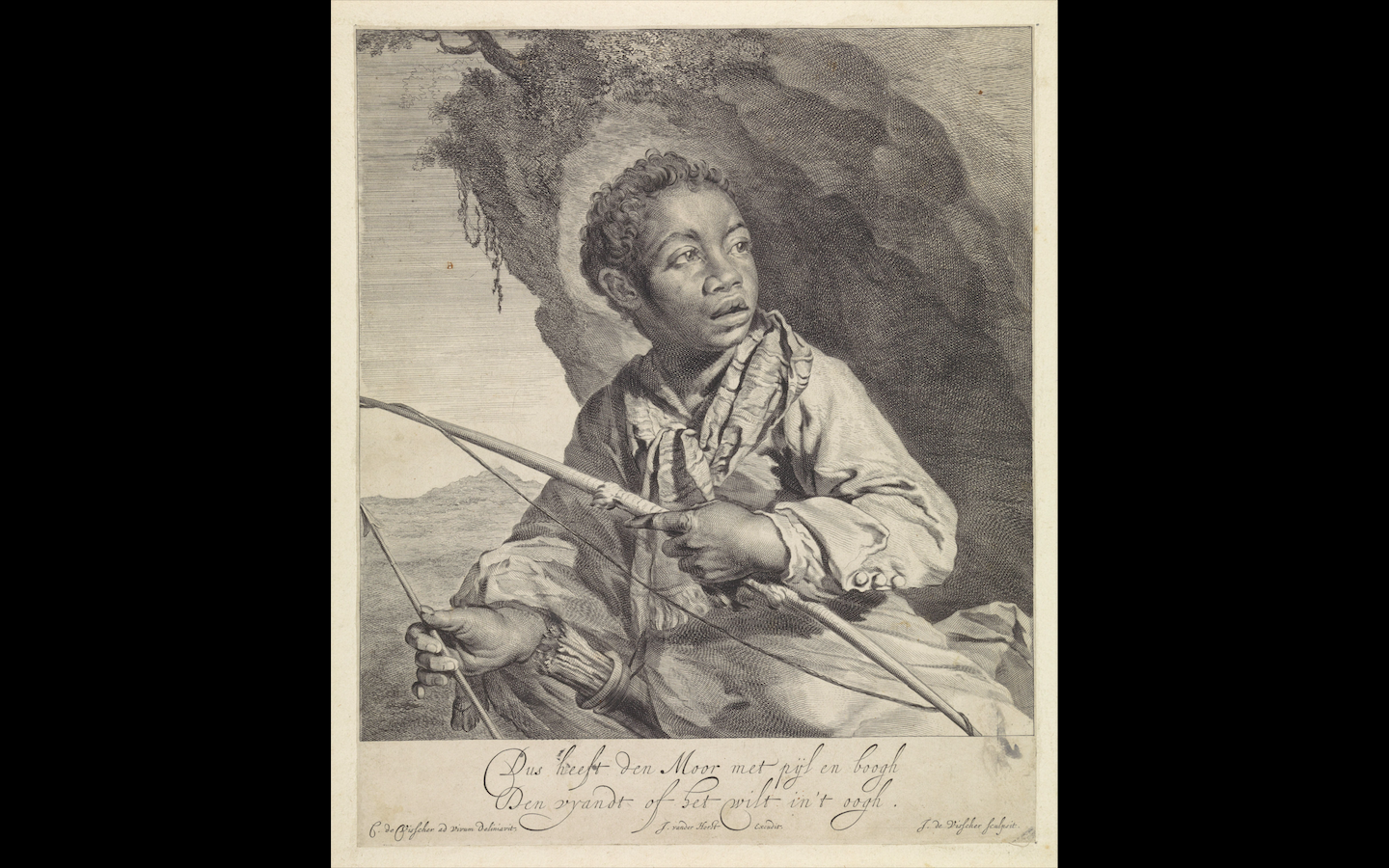 The engraving above, Boogschutter, by Jan de Visscher, from the Rijiksmuseum is also found in the exhibit “Black in Rembrandt’s Time”. In this image, the entire focus of the picture is of the black male. The eyes of the boy are looking out into the distance, evoking a sense of mystery. The viewers are completely focused on the boy and what his next action will be. When contrasting the two images, in this engraving, the black person is holding a bow, a prop, whereas in the first engraving, the black boy seems to act as a prop himself in the image. The engraving techniques used in this image also differ from the first image in the sense that the background is clearly distinguishable from the main figure. Different shades are used to depict the face, the hair, and the clothing of the boy as well as the background. The boy stands out as his own individual character here whereas the boy in the first picture does not. In this portrait, the black person isn’t a servant merely hovering in the background, simply enhancing the central white figure, but in fact the subject of the artwork himself.

This exhibit is so powerful because it highlights black individuals in a way that was so unheard of during the Golden Age. This “myth-shattering exhibition on identity and truth” shares the story of the black community in 17th century Dutch society and shows us how the portrayal of black figures in Western art pieces reveals much about Dutch attitudes to race ( Nicholls-Lee 20).This exhibit has revealed an indisputable truth- black people were not only present, but in fact free in 17th century Amsterdam. Diving deeper than the stereotypical images of slaves, servants, and caricatures, this gallery of portraits of black people is meant to portray a side of the Dutch Golden Age that isn’t typically acknowledged, illustrating the black figures with admiration, dignity, and respect. This exhibit presents the various roles that black people played in Dutch society during this time period as well as the different types of roles they played in paintings for the artists.

Breaking these stereotypes is so important for black people, as they’re able to look at these 17th century paintings and feel proud as a black person, rather than being overcome by feelings of sadness and discomfort. Negative portrayals of black people in Western art are harmful as it not only affects how others see them, but often influences how black people view themselves as well. When the only depictions viewers see of black people are negative, those portrayals can often transcend to public image. Representation goes way past simply Dutch artwork. When the media only portrays one monotonous view of black people, this inadequate representation can be very damaging, as seen by how black people are treated in the criminal justice system today. The exhibit, “Black in Rembrandt’s Time”, is one step in the right direction towards achieving greater representation for black people. The creators of this exhibition chose to end it with a show of contemporary Dutch artists with African roots, striving to represent a vibrant and eclectic community.

Through combining artwork from the Dutch Golden Age with old records from the city archives, the exhibit “Black in Rembrandt’s Time” places emphasis on black recognition and acknowledgement. Though the detailed artwork in itself warrants a visit to this unique showcase, the deeper meaning behind the purpose of this display transcends past the outer beauty of the compositions pictured. Exclusively illustrating black people in inferior, lowly roles is harmful not only because it is historically incorrect, but also because it is detrimental in terms of representation for black people nowadays. By challenging the existing Eurocentric views of history, this exhibit has accomplished a great feat, illustrating an advance for black visibility and accurate representation in our world today.

“Black in Rembrandt’s Time: a Myth-Shattering Exhibition on Identity and Truth.” DutchNews.nl, 22 May 2020, www.dutchnews.nl/features/2020/03/black-in-rembrandts-time-a-myth-shattering-exhibition-on-identity-and-truth/.

Blakely, Allison. Blacks in the Dutch World: the Evolution of Racial Imagery in a Modern Society. Indiana University Press, 2001.

One thought on “Forgotten Portraits of the Dutch Golden Age”