When I think Dutch design and architecture I do not think about the land it is placed on or how it got there.  Call it American ignorance, but I did not know until prepping for this class that the Netherlands was literally build from the ground up (including the ground).  I used to think that Dutch contemporary architecture was the opposite of natural.  Cold and industrial what relationship could it have to the land? And as we read witht the scathing review of the Stedelijks new Bathtub, not all buildings have relationship to their surroundings, but the good ones, the ones we hopefully remember and learn from do.  In this essay, I will explore many different aspects of how Dutch design and architecture deal with and relate to nature.  In some parts, in order to clarify my thoughts and make them more relatable I will compare the Dutch Approach to the American.  Comparisons are a great tool because they highlight what makes each part unique.  The limitation lies in finding the correct balance in discussing the two parts.  Using the United States of America, which we are all familiar with, as a comparison, the intricacies and distinctions of Dutch design and the Dutch relationship to land becomes apparent.

I will start with perhaps the last thought I put together during this week, the role of space in Dutch design.  Space is a distinctive feature of Dutch design.  Open spaces are integrated into cites, and used as barriers between towns.  Even in a location and situation that would lead most to utilize every bit of space possible.  They purposefully leave bits blank.   Lack of space can lead to the feeling of suffocation, whether it’s the suffocating of a traditional building by a new one (the Stedelijk Bathtub), or suffocation of land by civilization, where as planned space (even in an country where space is lacking) allows visitors and viewers to almost feel the placebo effect of space and room to breathe.  Wanting and needing for space in which to grow, the open areas become even more important for areas in which to relax and take a break from the hustle and bustle.  Like how spaces in paintings and architecture can prepare the eye for something new, spaces in cities allow the residents and visitors to transition from work to play, and integral balance for a happy population.

In the United States, we can’t help but have this breathing space.  Spanning across a continent our country is not for want of land.  And in America we see cases of overgrown or uncared for nature everyday out in the world.  What does this reflect about our society?  Is it merely our inability to control the vast swaths of nature we think we reign over, or does it show our disregard for the details and borders of our “civilized” world?  There’s a difference between open wilderness and overgrown bike trails.  We have, as a country, time and time again shown our ability to triumph over nature, and our apathetic view towards the environment.*  We put trails in to areas to encourage biking and walking, but lack the follow through to keep them in shape.  And speaking of biking, the lack of bike friendly streets discourages people to use the more earth (and body) friendly transportation.  These liminal spaces where human traces remain in nature in a dilapidated state, truly show our relationship with nature.  Instead of having fewer things that we keep in great condition, we constantly feel the need to have and create more.  Yes, the Dutch don’t have to deal with anything close to the amount of land Americans do, but they also realize their limitations, and they pour more time, effort, and money into keeping their nature and infrastructure intact.

The relationship between civilization and nature can also be viewed through works of art.  Landscape paintings can unlock a great deal about how a culture views nature.  An interesting relationship between our view of landscapes and the Dutch, is that the English word landscape derives from the Dutch word Landskip.  Landscapes are the macro, not the micro, looking at broad general sweeps of a culture and their literal view of nature.

American landscapes are numerous in style, but perhaps the most famous are the broad sweeping vistas of the West.  In Thomas Moran’s The Grand Canyon of the Yellowstone, the landscape of the West is painted in soft dawn light, and the dry dessert of the Grand Canyons separates the viewer from a luscious and abundant waterfall in the distance.  Symbolically, the Grand Canyon stands in for the western United States, in general a harsher and dryer environment than the East.  But the first explorers and settlers knew that there was something grand waiting for them at the end of their long journey.  This view of land as something merely to be traversed, conquered, and collected shows an almost disrespect of nature when it is not perfectly tuned to our needs.  Instead of learning how to live in the plains of the West, we simply skipped over them.

In 1711, Jan Luyken printed an etching depicting a Dutch landscape with a mill and villager in the foreground and a distinct church steeple in the background.  The separation of the land and the town is distinct but the two areas are invariably connected by a stream flowing by the mill back from the direction of the town.  This visually and symbolically links the areas, but the township lays in the distance which emphasizes the separation.  Once again, the idea of space comes into play. But more important is the hierarchy of scale.  The farmer dwarfs the land, his head reached beyond the horizon, showing the mastery of mankind over nature.  However, he is dwarfed by the mill.  In comparison to the general technical achievements of the Dutch he would not be there.  Perhaps the very land he farms was once in constant chance of flooding but the building of dikes, dams, and mills saved his livelihood.  As a human he acknowledges his power over nature, but is in reverence of the land he could have lacked.  Whatever function landscapes play in a piece of art, it reflects that society’s view of the broader natural world. 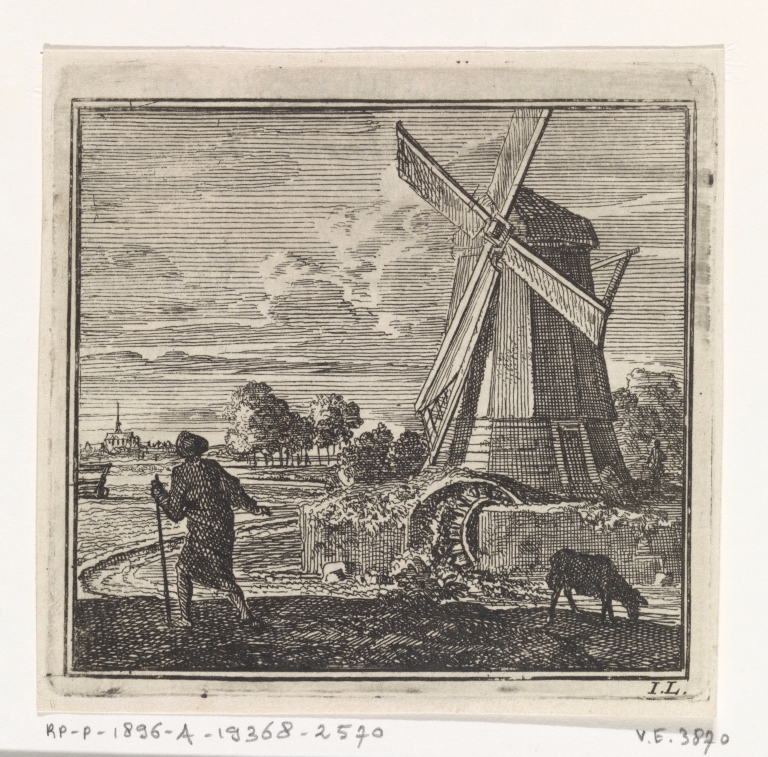 So, if landscape paintings and engravings can unlock broader views of a culture, what can architecture unlock? The word ontsluiten, to un lock or open up, is brought up in False Flat reference how infrastructure can unlock a community making it accessible and opening up what lay hidden before (Betsky and Eeuwens, 104).  The EYE – New Dutch Film Institute building is a perfect example of how architecture can literally, and metaphorically, frame a view of a city and open it up.

Situated in Amsterdam Noord, across the IJ river from the old city center, one can view the older side of the city from inside a landmark of the new development.  Framed by the ever so contemporary New Dutch Film Institute building, even the modern attributes of the south shore of Amsterdam could feel old.  As one walks beside the glass walls of the New Dutch Film Institute, the city of Amsterdam unfold in front of you.  Like a movie, you are immersed in the environment on the other side of a screen, in this case the windows and the river, while you are also immersed in the frame through which you view, the building itself.

The location of the New Dutch Film Institute building also facilitates its role as a key that unlocks Amsterdam.  Located on a slight natural peak on the north shore of the IJ River it is a visual reminder for viewers on the opposite shore of the growth and modernism of the city.  It juts into the water from which this city grew and is now a landmark of the modern city.  Landmarks inherently unlock the history and importance of a city.  Think of our landmarks here in Washington D.C., the Capitol building, the Washington Monument, the Lincoln Memorial.  All three are architecturally neo-classical which visually legitimized a young country and reminds all visitors of the past, present, and future of the classical idea of democracy on which our nation was founded.  What does this contemporary architectural marvel reveal about what the Dutch view as important?  Innovation, design, practicality, and unification.  This building is a symbol of all of these attributes.  Innovation is visible in its ability to adapt to its surroundings.  The building is irregularly multi-faceted.  The multiple facets present a new face, a new appearance at each angle.  Like the city it is situated in, it is always changing.  These facets create a general form that mimics the swells found in natural bodies of water, but they are created by rigid forms.  This unique combo highlights the design of the building and the unification of architecture and land.  In practicality, it is an institute that educates all generations of Dutch people, and like many Dutch buildings it does not need a lot of land to do this.

The limitations inherent in living in the Netherlands forced designers, architects, and artists to approach everything from a unique angle.  I can’t think of many other cultures that would have decided, or been stubborn enough, to not let nature do her course and instead force their civilization on her.  Yet instead of building monuments to their power over earth, they have retained a sense of respect by letting her breathe in areas and respecting their own boundaries.  Respect of land and its place in their lives has been engrained in the Dutch people for centuries, in stark contrast to the American view of land, as seen in landscapes of the two cultures. Even in the most urban of areas, nature plays an influential role in the creation of buildings.  The minds of a society that came up with ways to create land where there was once water, and maintain said land, show a balance of creativity, artistry, and engineering that naturally lends itself to design.

*With the popularity of the Climate March, and concern raised by the current administration we see the public view changing.  But our stance as a country has consistently been behind the curve in terms of green initiatives and interests.