During the two weeks in Amsterdam, our previous readings have helped me look deeper  d think critically about everything I saw. I started noticing the amount of museums dedicated to the Holocaust and World War II. This includes the Anne Frank House, The Dutch Resistance Museum, the National Holocaust Museum, Hollandsche Schouwburg, and the Jewish Historical Museum. While it is not something that most people like to think about, it is important to understand what happened as not to allow such atrocities to happen in the future. Museums help to preserve history and educate the public on subjects such as the Holocaust. For a Holocaust/WWII museum, creating different exhibits for children that educate without frightening can be difficult. In addition, people who come to these museums are often tourists looking for some education but mostly looking for a cultural attraction. What is the best way to do this? Is it through personal Holocaust stories or generalized history?

The United States Holocaust Memorial Museum, USHMM, in Washington, D.C, is a wonderful example of Holocaust-related museums done right and fully immerse the visitor into the education and understanding of the Holocaust. Although not in Amsterdam or in a place physically affected by the Holocaust, this museum is a leader in Holocaust education and remembrance. In “The Artful Eye: Learning to See and Perceive Otherwise inside Museum Exhibits,” Jennifer Hansen-Glucklich discusses how museums use portraits and photographs to further emotionally connect to their visitors. Hansen-Glucklich focuses closely on how the visitor sees something in a museum and discusses the “grammar” of a museum. This concept explains that the walls of a museum’s exhibition create structure and rules like the rules of grammar. Like grammar, the structured exhibit space is aware to the visitor but does not reveal its true purpose. Also like with grammar, the exhibit walls create both harmony and disharmony to the feeling of the sentence/paragraph, or in this case the topic being exhibited. (Hansen-Glucklich 88-89). It is about educating and controlling the visitor’s perspective to come to a certain conclusion/emotion about the museum topic.

This museum is wonderfully set up to surround the visitor with the history, emotions, and tensions that was happening during World War II. Initially the museum starts off with a lot of reading and text in this museum but the entire museum is the full experience. This museum is meant to be fully immersable, chronological, and connect with the visitor with more than just historical facts. Through visitor connection, the story of the Holocaust is brought into an emotional and personal context. The museum tells the visitor when to look in and reflect on what they see after the entire museum. There is a space of remembrance that allows the visitor to light a candle for the Jews from difference concentration camps, regardless of whether they knew someone there or not. The museum connects and controls the visitors’ emotions and thoughts while in the museum space. This is done with exhibits, films, portraits, and even with the architecture.

The USHMM’s purpose is in their name, “Memorial.” This museum is preserving and expressing memory and truth. The USHMM’s slogans include “never again” and “never forget.” It is about educating the public so that something like the Holocaust can be prevented or stopped. The USHMM branches out and tries to make the Holocaust and other genocides a part of public knowledge and awareness. In Amsterdam, the Holocaust-related memorials and museums are less obvious or visited but not minimal. Often, I remember walking in parks and finding a WWII or Auschwitz monument or walking down the street to come across the Jewish Historical Museum. They are not mentioned in guidebooks or often on maps. In the Netherlands, one must go out of their way to find a Holocaust-related monument or museum. This may be because the Dutch are afraid of their idle role in the German occupation of the Netherlands. Because of this, they only show themselves as innocent bystanders and resistance fighters, for example the Dutch Resistance Museum.

The only Amsterdam Holocaust-related museum that is known worldwide is the Anne Frank House. This wonderfully curated museum takes the visitor chronologically through the life, hiding, and death of Anne Frank and her family. The popularity of this museum and memorial would not be so widely known if it was not for Anne’s diary, published posthumously by her father, Otto. Almost every middle school or high school aged person has read this book about Anne growing up and the war around her. This personal view of the Holocaust allows for emotional and historical understanding from its readers and the visitors to the house. However, has this museum lost its true meaning and message and become mostly a tourist attraction? This idea concerns me that, to visitors, this is just another museum or attraction to see in Amsterdam. People wait hours and hours outside to get in but at what point does the waiting in line become the popular thing to do? Is the Anne Frank House just something to see and experience while you are in Amsterdam? 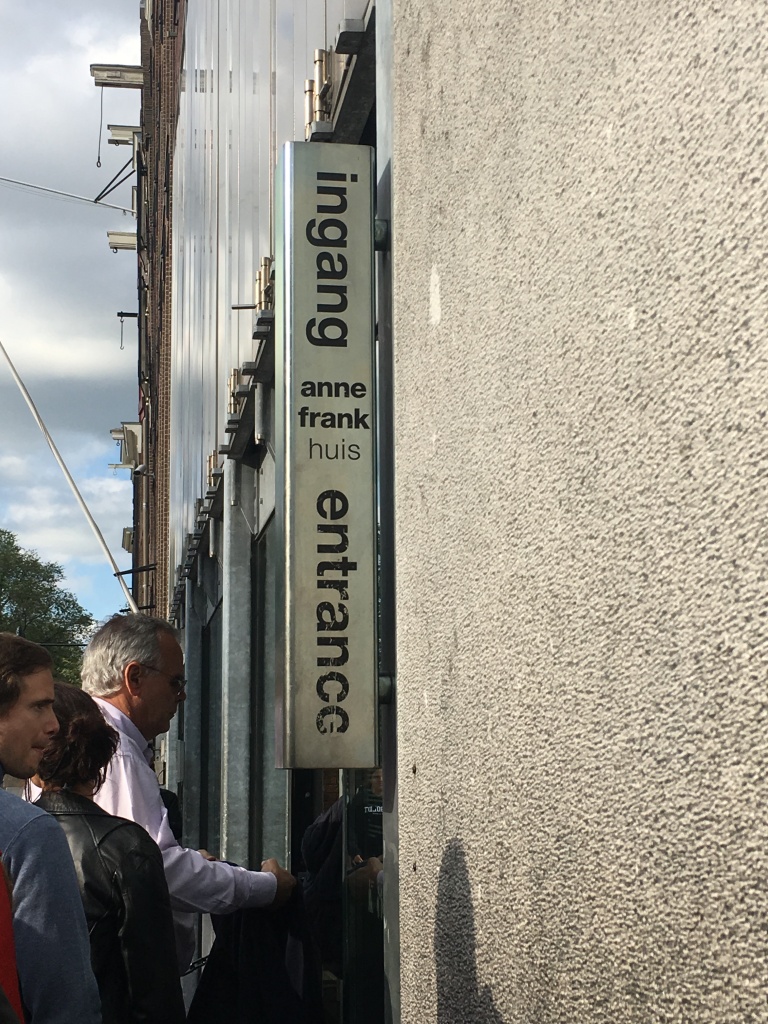 As a tourist attraction, the Anne Frank House draws tourists in fully unaware of the education and deeply emotional understanding they will receive about the Holocaust/Nazi Regime in the Netherlands. The museum forces tourists to understand and reflect on Anne’s life. By connecting to an innocent girl, there is more of an emotional, human connection to the horrific events of the Holocaust. However, during our time at the Anne Frank House, I could see many people were not getting the point of such a place. They were taking pictures, talking, even laughing inside the house and through the exhibition spaces. This place is a memorial to the Franks and others who hid in the Secret Annex and for those who hid them. This is not just another historical or cultural museum; it is a memorial to them. The visitor can never truly understand what the victims and survivors went through during the Holocaust. This would be probably impossible to understand because everyone has a different struggle and experience with the Holocaust. It is a museum’s duty to tell the truth and to be as authentic as possible.

In addition to this museum, I also went to the Dutch Resistance Museum. This museum is less focused on the personal connections, unlike USHMM or the Anne Frank House. They are more focused on showing the Dutch citizens in good light and against the Nazi Regime. This makes me wonder whether or not this is one sided and pro-Dutch.

In the junior section, we follow the lives of four children with different stories and views during the Holocaust. One of the children discussed was Eva Schloss. Eva and Anne Frank were close friends before the war and both were sent to Auschwitz. Eva survived and continues to write books about her life and the Holocaust at age 90. How come we haven’t heard of her before? Why do we not read her books in school? We now can see that the Anne Frank House is not just a memorial to those who hid there, but for all hidden Jews.

The junior section of the Dutch Resistance Museum makes me think back to the junior section of the USHMM. Here we have a very similar true story of following a Jewish boy named Daniel and his family during the Holocaust. The exhibit is set up much like the Dutch Resistance junior section where the visitor or child goes through the Jewish child’s house to learn their story. While a difficult subject for an adult to get through, these exhibits are made specifically for children. While they do not sugar coat things, the truth of the Holocaust is told in a general but humanized way. The museum does not try to emotionally connect with the visiting children but rather tell a personal story of another child. This makes it real without being too scary. While USHMM and the Dutch Resistance Museum have wonderfully curated and effective children’s sections, they are museums geared towards adults.

The Dutch citizens of Amsterdam have a responsibility to remember and own their past, including the Holocaust. While they do not do it publically, their large amount of museums and monuments show the importance. With museums such as the USHMM, The Dutch Resistance Museum, and monuments the memory of the Holocaust will not be forgotten and the public will be educated and aware of injustice. With tourists in Amsterdam visiting the Anne Frank House, they are sucked into a museum, unaware that they are in a memorial. This can both help and hurt. On one side the visitor is experiencing and being educated on the Holocaust and on the other side, they might not take it seriously. Throughout Amsterdam Holocuast-related museums, the importance is to educate the public and remember the past. Although they are not all as popular as the Anne Frank House, these museums show the important roles of a museum curating the past as a memorial.

Hansen-Glucklich, Jennifer. “The Artful Eye: Learning to See and Perceive Otherwise inside Museum Exhibits.” Museums and the Challenges of Representation. Rutgers University Press. 2014.

Photographs are my own.