I sit on the couch while I explore Amsterdam though my laptop. I work from home and attend classes remotely. I am living in the middle of a pandemic. My life as I knew it is no longer fathomable — society as I had known it has been warped. Now, the orange pedestrian of Google Maps travels Amsterdam for me. He boats the canals woven though the city, walks the streets lined with homes, and immerses himself into the rich history of Amerstdam’s architectural evolution.

Amsterdam is a city that has been developed and refined over centuries of discourse and shifts in city planning methods. I’ve continued to come back to the idea that Amsterdam is shaped by a model of an onion, where layers are created and can be distinctly pointed out. The similar conclusion can be drawn that the environment of Amsterdam could also be characterized as one timeline, where one can see developments of the city through the scope of time both physically and chronologically. When walking down the streets of Amsterdam, one might see the progression of time through new forms of architecture occurring as the walk continues. One might see a city that had exploded in population growth, where expanded housing became necessary and the outskirts of Amsterdam, once farmland rural scenery, became habitable with suburbs with accommodating housing. Betsky reflects on the idea of how greater detail of one city is revealed as you commute through different parts of a city, as space is related to time in city planning, because as cities expand over time, so does their architectural styles and planning methods. My virtual stroll of Amsterdam is met with a comprehensive picture of how the city finds itself knit together. What’s revealed is the impact that architecture and city planning creates on its people and their society — the cities we create shape us not only psychically, but socially. 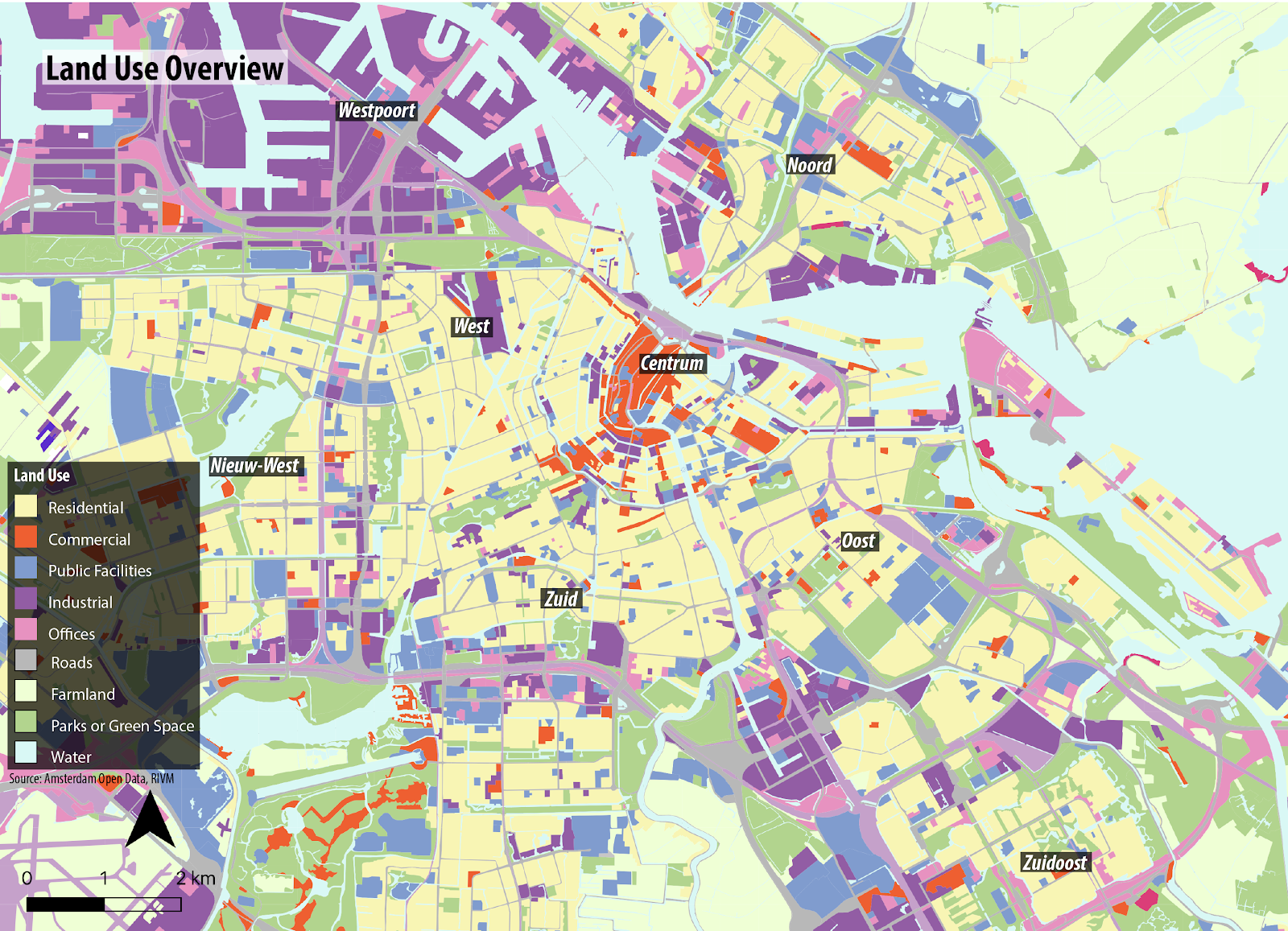 As I travel Amsterdam through a digital street view, I first stop to follow the path Bekker takes as he falls in love with the school girl of Amsterdam. It is the streets of Sarphatistraat that Nescio then describes to be the most beautiful place on the face of this planet (Nescio, 41). Today’s view found from Google’s photos can offer a stark contrast to what Nescio first interpreted. Today, walking along the street can present the timeline and evolution of Amsterdam architecture, as I scroll through buildings put up in the 1800’s, while modern office spaces sit cozily nextdoor. This layer of the onion Amsterdam has established represents a moderately upper-middle class residential area, as modern workplaces and learning spaces line the streets. Here, for example, you can find the Rijksakademie van Beeldende Kunsten, a learning academy catering to philosophers, academics and artists. This learning space presents continuation between now and Nescio’s time, with traditional architecture found in the brick facades, while the workspace of McKinsey & Company Netherlands found further down the street demonstrate how modern architecture has been incorporated into Amsterdam. These newer, modern buildings represent trends such as a return to Amsterdam New West styled architecture, with the open space surrounding these buildings when provided, and the extensive use of glass and concrete. Similarly to Betsky, this draws on how over time architectural trends develop and change, as a commute even down the street can present an assortment of architectural styles.

The stark contrast between these two buildings, however, symbolize the discourse that has been ongoing with Amsterdam architecture for decades and even centuries. The differences and change in Amsterdam architecture create a visual timeline as you move across the city. The introduction of modern architecture has been slowly incorporated into Amsterdam through the late 20th century, but it is met with ideas that crafted architecture from decades before. There is this creation of a signal that displays the discourse found within the architectural styles of Amsterdam, as Sarphatistraat provides an example of one of many streets that are filled with the mis-match bag of architectural trends found across Amsterdam.

Amsterdam has continued to grow over centuries of population growth and rapid expansion of evolving industries. By 1921, Amsterdam would quadruple in land mass, with additional municipalities sprawling in each and every direction (Joppe). While the center of Amsterdam is marked with commercial use, farm land can be spotted on the outskirts of the city. However, as the city’s population grew so did the city’s expansion efforts. This would lead to a shorting of housing by the mid-19th century, and there would need to be more housing put up for the growing population. The government of Amsterdam at the time took into action policy that would rapidly develop housing in the outskirts of Amsterdam. Groeikernenbeleid, growth core policy, and Nota Ruimlijke, Policy Agenda Spacial Planning, were uses of spacial planing for increasing number of inhabitants. Under these policies, housing was developed in methods that could accommodate large numbers of Amsterdamans; this lead to the rise of suburbs within Amsterdam.

Throughout the mid 1900’s, suburbs would be developed that used styles that required more space in the surrounding areas. Suburbs and neighborhoods such as Dutch Le Corbusier provided space and land that freed Amsterdamans of the tight quarters the inner city created. Architects embraced new shapes in building that were less efficient in space, but more expressive in style. The accommodation of maximizing space became less of an issue as architects found themselves with less limitation as they enjoyed more land to work on. New objectives, such as exploring new styles and maximizing greenery became a priority. The neighborhood created a stark contrast to the neighborhoods found within inner Amsterdam, such as the leaning houses found upon canals, where streets are narrow and houses lie in rows. Social life in Amsterdam would adapt to these new constructs that the architecture and city planing established, and would define the mid-19th century in Amsterdam. Betsky reflects on the idea of how much the Dutch embraced space and greenery, with “green hearts,” those who idealized and enjoyed the openness found within the outskirts of cities (Betsky, 24). These suburbs almost seemed to merge the two at this time in history, providing housing in areas where space was an option.

The onion of Amsterdam creates a timeline of Amsterdam’s rich history of architectural design and city planning methods. The discourse and spacial planning policy can be found within distinct layers of the onion, and mark specific times in Amsterdam’s history. The lasting effects of these changes and developments go beyond the physical realm, because they additionally provide sociological impacts that mark these times of Amsterdam distinctly in history. It’s the tightly woven city streets that Nescio describes in his tale of youth through Amsterdam that offer a unique time of the city, whereas the suburbs of Dutch Le Corbusier from the mid-19th century depict a movement towards open space and the fondness towards greenery. The landscape of Amsterdam is shaped by these cultural shifts, because we are defined by our architecture and city planning. As I sit here on my couch, confined to the architecture of my own city and its planning, I too learn to adapt to my surroundings. The openness of the midwest provides a sense of space that might mirror a once West-Amsterdam neighborhood. Our landscapes shape our behavior, and while I’m not in Amsterdam to be shaped by its own, I’ll leave it to my orange pedestrian friend from Google Maps.

One thought on “Discourse and Development”